According to GLSEN's 2017 National School Climate Survey, only one in five LBGTQ student ever sees positive representations of queer life in classroom readings*. This June is the perfect time to remedy this imbalance with relevant, compelling literature that spans the globe and showcases the diversity of LGBTQ lives. You'll find links to that literature, along with tools for teaching and learning, below.

1. From Puerto Rico, the story "Bruises," first published as part of the 2019 Pride issue of the magazine Words Without Borders. We love this story, set in a middle school just before the 1968 moon landing, because it doesn't shy away from complexity but is also firmly rooted in the concrete experiences of its characters, as they tackle bullying, changing friendships, gender expectations, and encounters with the adult world. "There's nothing to give up, Elena. We just are the way we are." As they read, students might mark which characters' stories resonate with them, and then discuss their responses in pairs or small groups. (Includes some anatomical slang.)

Afro-Caribbean writer Yolanda Arroyo Pizarro won the National Short Story Prize of the PEN Club of Puerto Rico in 2013 for her collection Las Negras. Known for exploring the limits of female characters who challenge hierarchies of power, here she traces a relationship that morphs from bullying to bond. Muscular young teen Elena fights her way into a tough boys’ gang as they pummel the effeminate Ricardo. As she navigates often-confusing social and sexual currents, and faces her own crush on the alluring Johana, her relationships with both the gang members and their target evolve.

For contextual resources and teaching ideas, take a look at our blog post "We just are who we are": Teach a Puerto Rican story of identity.

2. From Turkey, "Muzaffer and Bananas," about two boys who skip school to visit the zoo, and discover that their relationship is changing. As the introduction to the story explains, Yalçin Tosun's chubby, despairing Turkish teenagers find solace in visits to the zoo. But an unexpected change to their routine abruptly alters their lives and their relationship.

3. Also from Turkey, graphic non-fiction about the LGBTI community's defiance of the cancellation of a gay pride march. 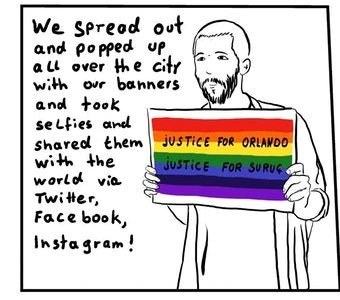 Panel from "Where Are You, My Love?" by Beldan Sezen.