In the Magazine: Writing by Instinct

I finally got rid of my cat. I thought this would enable me to start a new life. So begins Can Xue's funny, disturbing story, "The Bane of My Existence,"* published this month in the 15th anniversary issue of Words without Borders. The issue's title, "Great Explorations," comes from an essay of Can Xue's, in which she comments:

An advanced modern reader acts like a detective. In the forest of books, he can follow the clues and discover the enormous treasures underlying them. Those books give him messages: his inner concentrated essence receives the messages and immediately produces new ones. These blended messages lead him to enter a tunnel of the spirit, and in that place he begins a great exploration.

In her own writerly explorations, Can Xue follows instinct rather than reason, and "The Bane" is an example of just how far instinct--- both literary and animal--- can take us. As students read about the narrator's attempts to tame a stray cat, they can use this line from the story as a guiding question: Where did it all go wrong?

Or, you might pause their reading at several key moments, and ask what they would have done in the narrator's place. Most likely, some of them will reply that they would give up the cat, which is a logical response. Ask them why the narrator doesn't do that. What is happening to her, on an emotional (rather than logical) level?

This story also offers a window into ancient Chinese and Japanese culture with its mention of the "fox spirit." In Myths and Legends of China, a 1922 book, Edward T.C. Werner writes:

Generally, the fox is a creature of ill omen, long-lived (living to eight hundred or even a thousand years), with a peculiar virtue in every part of his body, able to produce fire by striking the ground with his tail, cunning, cautious, sceptical, able to see into the future, to transform himself (usually into old men, or scholars, or pretty young maidens), and fond of playing pranks and tormenting mankind. You might ask students whether they notice any similarities between descriptions of the fox spirit and of the cat in this story. 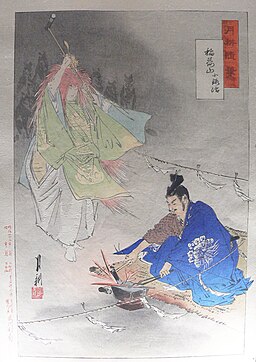 * Note to secondary teachers: the story includes some off-color language, and a cat is harmed.

If you use this story in classroom, do let us know how it goes!