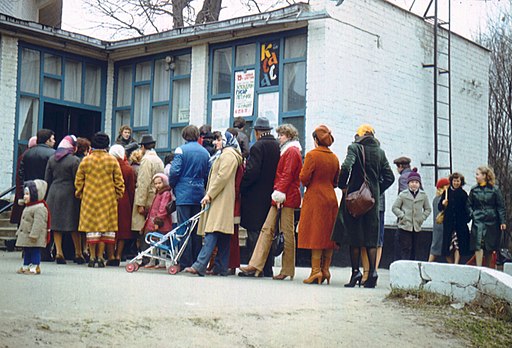 All around the world, perhaps at this very moment, young adults are being subjected to some version of the "When I was your age…" lecture. In the April issue of Words without Borders, an Estonian poem offers a savage précis of an elder's account of how difficult life used to be in the former Eastern bloc:

you’ve no idea
what it means to stand in a sausage line!
a bread line! a milk line! an egg line!

The poem's narrator then muses:

Did her elders battle Communism only in order to wax sanctimonious about the struggle? Why else would they go on and on about the past? Of course, some members of the older generation also like to wax nostalgic for the Soviet era, like the saleslady who once told the narrator she misses the days when everyone wore the same uniform (Vladimir Putin apparently feels the same way, according to this article on a state-sponsored website.) The poem skewers this sentimentality, too:

These lines allude to George Orwell's Animal Farm, with its famous revised precept, "Some animals are more equal than others." Grigorjeva's poem would pair well with that novel, as well as with other work set during or after the Soviet era, such as Ludmilla Petrushevskaya 's "Milgrom", which also discusses clothing, and Natalia Klyuchareva's "None of Your Business," which portrays a young's man's defiance of sanctimonious elders.

To introduce Grigorjeva's poem, you might ask students to talk or write in response to the question: "What do people in the older generation say about you and your peers? About how life used to be?"  Or, you might show them Schuyler Holland's recent animation of Al Yankovic's "When I was your age," featuring the line, "We were hungry, broke, and miserable, and we liked it fine that way."

As an assignment, you might have students write their own poems, addressed to the adults or authority figures of their choice, and beginning, as the poem does, with the line, "you're right."  To spark or feed an interest in Estonian culture, you might screen the film "Revolution of Pigs," about a group of rebellions teens; the Guardian calls it, "crackling, bawdy fun."

In addition to being one of Estonia's “young angry women” of poetry, Sveta Grigorjeva is also something of an anti-choreographer; below, you'll find her one-minute "non-dance performance," "Carmina Trash."

* The Pioneers were members of a Soviet youth scouting organization; the distinctive uniform included a red tie. For a video of children at Pioneer camp, visit Seventeen Moments in Soviet History.